Inside: Do you want to throw your daughter the best girls spa birthday party at home? And keep the costs low? Here’s how I managed to do exactly that for my daughter’s 10th birthday party with five of her friends.

One of my favorite things to do is spend my free time planning my kids’ birthday parties.  My son’s Pokemon party was my favorite but not the easiest.

So for my daughter’s 10th birthday party, I threw her an at-home spa birthday party.  I was able to keep this low cost, and the girls had an absolute ball.

Balloon Tradition for all Parties

A tradition for my kids birthday parties is to have a countdown for every one of the events in the party using balloons. For each thing we do, I have a balloon that marks the hour.

I love having balloons to mark each hour at every one of my kids’ party because:

I numbered the balloons 1 through 7 by marking them with the number in a big black Sharpie. The first balloon was popped at 6 pm then one balloon every hour after until Midnight. 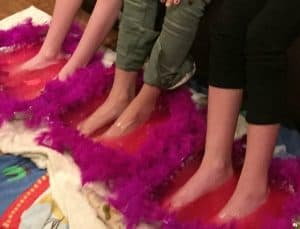 My daughter popped the first balloon soon after 6 pm, and most of the girls arrived.

As per our little tradition, the Birthday Kid pops the first balloon, and then they take turns.

Inside the balloon was a piece of paper that said “taco bar.” A simple buffet dinner is a smooth beginning to the party as it allows late ones to not miss out on anything.

At 7 pm a guest popped the second balloon. Inside this balloon, it said: “Would You Rather.”

The girls sat around the table while I cleaned up and they played a round of would you rather questions. I compiled a list from a couple of different places here and here and then cut them up and put them in a bucket.

The girls passed the bucket around the table and took turns asking questions.

Would You Rather is a fun game for kids to start with especially if you’ll have girls that don’t know each other.

They had a lot of fun playing the game, and they easily could have done it for over an hour. I put all the questions back in the bucket afterward, and the next morning they got them back out and did them again.

For prior birthdays, we’ve played Mad Libs or tossed a ball covered with questions on it. I’ve since bought a card deck of child-appropriate Would You Rather questions you can also use.

An hour later, balloon number three revealed it was time for Pedicures and Facials.

How to Make a Personalized Pedicure Tub

I bought six 13×9 foil baking pans from the dollar store, one for each girl. I covered each one with feather boas or Christmas garland I had at home using hot glue.

Then I placed their initial in the corner using cardboard letters.

Depending on the type of feather boa you use, it can be reused and sent home with the girls as a party gift.

The Christmas garland held up better through the pedicure while the ones made out of feather boas weren’t worth saving after one pedicure.

Each guest sat in front of their personalized foot soak. I laid out towels on the floor under the foot soaks and filled each one with warm water. Each foot soak was topped off with soap rose petals from the dollar store.

Each guest chose from an array of fingernail polish and flip-flops, all from the dollar store.

I hired a teenage girl to assist me in painting the girls’ feet to speed up the process.

While the girls were waiting for their pedicure, they soaked their feet and applied their face mask (again from the dollar store).

I cut up a cucumber for added effect and had each guest relax with their face mask and cucumber while their feet were soaking.

At 9 pm a guest revealed the next balloon contained a piece of paper that said “Henna.”

The teenager I hired applied henna to each of the girls’ hands.

At first the girls were unsure what henna was, but in the end, this was the highlight of the evening.

An hour later the girls popped another balloon to see it was time for a dance party. I opened up the basement, and we turned on the karaoke machine.

I let the girls go crazy downstairs and dance away once I was sure everyone’s toes and henna were completely dry.

After dancing, another pop of the balloon revealed time for ice cream and presents.

Instead of birthday cake, I have an ice cream sundae bar each year with all the toppings. No one misses the cake.

The very last balloon at midnight was movies and sleep. Movies are always the last balloon for all my kids’ parties. I get everyone’s sleeping bag setup and have them choose a couple of movies and get the first one going along with popcorn.

Overall the girls had an excellent time, and I didn’t have to spend very much money on the party. The most expensive part was hiring a teenager to help with the pedicures and apply the henna.

Otherwise, all the supplies for the spa party were from the dollar store. The girl’s party bag was just everyone’s fingernail polish, their leftover face mask, and their pedicure supplies.

If you don’t hire a teenager for help, then you can keep the cost per girl at $10.

The above comes to $6/girl.

Add another $4/girl for a cucumber, popcorn, balloons, movies, cake, decorations and taco bar or whatever you’re serving for dinner.

Previous Post: « 24 Uplifting Affirmations – Who God Says You Are
Next Post: July Days of the Month Calendar for Families »