Here’s how to throw an unforgettable Halloween party for your kids that their friends will want to attend! It takes just a bit of effort and hours of fun!

When my kids were in grade school we moved into a new school district and they didn’t know any other kids.

I threw a Halloween party for my kids and let them invite everyone in their class. I knew the percentage of kids that came would be fairly small since none of the parents knew me and it was a way for my kids to seem like the cool new kid.

It worked. They made new friends.

It helped both of my children feel more comfortable at their new school. Many of the kids that attended the Halloween party then went on to become best friends with my kids throughout their time at that school.

Parents were able to meet me and didn’t feel uncertain about dropping their child off when it was for a “party”.

How to Throw an Unforgettable Halloween Party for Your Kids

Make it a Costume Party

Anyone that comes to the Halloween party – adult or child – has to come dressed up. That includes the host. This immediately disarms anyone who is nervous about meeting new people. I usually invited parents to stay, but rarely does anyone take me up on it. 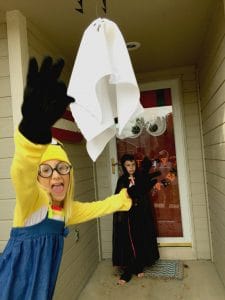 I decorated the front door as a monster door. Lots of ideas can be found here.

It’s as simple as it looks! All you need is a couple of paper plates for the eyes and crepe paper for the hair.

On the front bench, I made possibly the world’s worse mummy. But what’s great about grade school kids is they seriously don’t care. They love the effort.

Inside the house, I had ghosts hanging from multiple areas. It was simply a light white bed sheet hanging from a white balloon inside.

In multiple corners, I had a huge spider made from a black balloon and crepe paper. This idea came from a Minecraft birthday party but it looked Halloween spooky to me.

Related: How to Participate in the Teal Pumpkin Project

One thing I’ve learned from all the kids’ parties I’ve thrown – the cutesy food is more for the adults than the kids. The kids 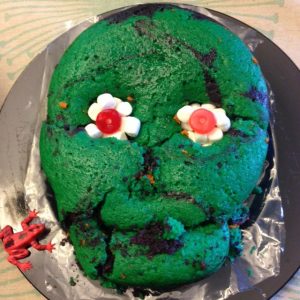 just want to eat and have fun. The adults are the ones that take time to notice the hot dogs look like little mummies and your punch resembles one big candy corn.

But if you’re insistent…finger food works best – pigs in a blanket, pizza, fruit, and sweets of course.

For all the kids’ parties, I dedicate one corner for a photo booth.

I put up a plain bedsheet and we use that as a background and I have a box of dress-up clothes or old Halloween costumes they can use as props.

Throw your dog in there for the pictures and it’s usually the highlight of any party.

We played Halloween BINGO using candy corn they could eat as we went. 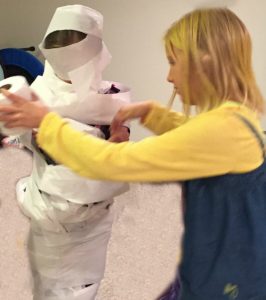 A game kids never get tired of is toilet paper mummy. (I even do a dress-up version of it for a girls birthday party with much success!)

Make sure you have plenty of toilet paper on hand. It’s cheap from the dollar store and I haven’t met a kid yet that doesn’t want to be the mummy themselves so we usually play this game multiple times.

Just in case this is the first time you’ve heard of it. You divide the kids into teams and set the timer for 1-2 minutes and appoint one child in each team to be the mummy. The other team members have until the timer runs out to wrap the mummy up in toilet paper. The judge decides who is the best mummy.

We also played a take on Halloween charades. The kids stood in two lines – boys and girls – then I called out something from the list below and the kids tried to walk like a creature the fastest. They had fun with this one.

In keeping with the creepy and scary theme of Halloween, the highlight of the party is when each child reaches into a cup to guess what the mad scientist has been cooking. I label each cup with the body part on the left for giggles and put the food listed on the right inside. No peeking!

Throwing ANY Party for Your Kids

Number two rule = have more activities than you think you’ll need. Some games will surprise you and they will play them over and over. Then there will be a game you spend forever preparing and they won’t want to play at all.

And…try to have fun and be a kid yourself!

Previous Post: « Celebrating Birthdays Big When You are a Single Parent
Next Post: 6 Reasons to Host an Operation Christmas Child Packing Party »