Secrets to a Successful kid’s Party

Keeping pre-teens occupied and away from drama can be a challenge. For my daughter’s 9th birthday party, I threw her a fashion show birthday party and combined her love of American Girl Dolls and Monster High. But to keep things running smoothly for all, I included a countdown of balloons to add suspense.

One secret to successful parties I’ve found that kids love and that keeps order during a party is having helium balloons with a piece of paper inside indicating the next activity and the time written on the outside. Or you could number them.

Allow the kids to pop them at the designated time. The kids, including the birthday kid, never know what activity is inside each balloon.

Kids never get bored of popping the balloon each hour. I usually find a kid who has wandered off during the activity to go look at the next hour’s balloon, as if they’re considering popping it early. You can give them a pin to pop it or I usually tell them to sit or stand on it and figure it out as a group.

Regardless if I’m throwing my kids a Pokemon party, spa party or a fashion show party, I gather some ballons and number them. The table decorations below show all the balloons with times marked at 6 pm, 7 pm, 8 pm, 9 pm, 10 pm, and 11 pm.

At age 9, my daughter was into American Girl and Monster High so I wove both those themes into her party. Whatever your child is into, add it to the fashion show party to personalize it.

In addition to the balloons, I have a couple of rules for preteen parties to keep it running smoothly. The fashion show party was no exception.

I tell the kids no cell phones. Either enjoy each other or stay at home and play games on your phone.

You can leave out a basket by the door for them drop them off. Especially for pre-teens, it isn’t fair for some kids to be on their phones when others don’t even have phones. They simply cause too many issues.

Obviously, I’m in charge. I don’t allow other adults to stay or try to “help”. I’ve found it just muddies the water if someone’s mom is there allowing her to do something no one else can do.

As mentioned above, we change activities every hour on the hour regardless of where we are on the current activity to keep things moving. I don’t allow anyone to go off in pairs and start any drama. We are at the party to enjoy everyone.

These rules may sound super strict but, the kids respond well to someone in charge and it keeps the party moving and stress-free.

Let the fun begin! Here’s what we did at my daughter’s fashion show birthday party. Each hour someone popped a balloon to tell us what the activity would be.

Guests were scheduled to arrive at 6:00. Shortly after my daughter popped the first balloon. All the girls scrambled to find the piece of paper that flew out.

The activity was a Taco Bar with Birthday Mad Libs. This was a fantastic activity, to begin with since not everyone arrives right on the dot at 6:00!

The popping of the 7:00 pm balloon is when the party really got started!

It was time for a Fashion Show with their American Girl dolls.

I’d spent the day preparing the house to turn the living room into a mini runway. Crepe paper was used to hang from the doorway so they could part it for a grand entrance. I taped down mini-lights and a roll of red gift wrap was used for a grand “red carpet.”

To allow them to make a grand entrance, I recorded the girls as they entered and had Taylor Swift playing for added effect. They entered with their matching American Girl dolls and they paused dramatically for pictures. 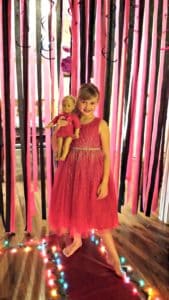 The 8 pm balloon said “makeovers with a twist.”

The girls began by sitting in a big circle and everyone doing the hair of the girl in front of the other. I gave everyone a hairbrush and assorted bows and clips (from the dollar store) but the trick was to not move too much or else you’d move the whole circle and your hair would end up looking a little crazy – which they all did of course.

Then everyone broke up into pairs (or I did it for them to prevent fighting) and each girl had 5 minutes to put makeup on their partner with their eyes closed. Then they switched. I didn’t hand out any eyeliner or anything that would poke anyone’s eyes. They were supposed to try their best but as you can see, I think some were a little silly. 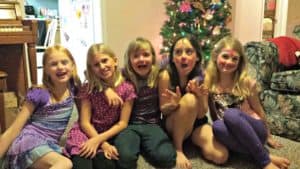 The next balloon stated “The Designer dress.”

I split the girls into two teams and gave both teams a couple of rolls of tin foil. They each had five minutes to create a beautiful dress for their model.

The model then tried to walk the runway. Each girl wanted to be the model so we rotated through. The girls didn’t mind using the foil from the previous “models”.  They enjoyed this activity so much it lasted an hour.

Our 10 pm balloon was ice cream sundae bar and opening presents. My daughter doesn’t like cake so I went overboard and got as many toppings as possible with chocolate and vanilla ice cream. Kids are usually waiting all evening to open presents and eat cake and ice cream.

The last balloon was at 11:00 pm. It was Popcorn and American Girl Doll movies. Or as I like to call it – Quiet Down Now.

I got out the huge air mattress and began having all the girls figure out sleeping arrangements and got them settled in with their movies so I could go crash.

The next morning I asked the girls what was their favorite activity. They responded with all different opinions. Walking the “runway” and the silly makeovers, including even the tin foil dress activity, was very popular. Which was surprising to me because I almost threw out the tin foil dress at the last minute.

Hey there, I'm Jen! I've been a single mom for over eight years. I know firsthand how hard the single parent journey can be. It’s my mission at Grace for Single Parents to uplift, renew, and propel single moms to live a full life with God's grace and love.

Previous Post: « Feeling Excluded at Church? Here’s How to Beat It
Next Post: How to Teach Your Children the Fruit of the Spirit »